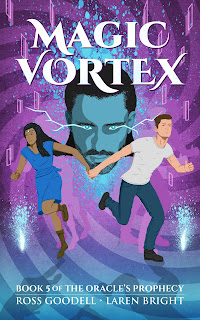 Returning to the Guardian Academy for advanced training, Ben and Mizli learn that Kantab is hatching a plan to regain dominance, threatening the very balance of two worlds. But their already challenging training goes into overdrive, so there’s no time for sleuthing.

As Kantab’s plot plays out, Mizli and Ben find themselves faced with a choice that could thrust them far beyond their training and plunge them into a mind-warping Magic Vortex. Choosing in, they race to prevent the Emperor’s diabolical plan to take over Bespri and Earth…if they can find their way out of the bewildering time maze.

Magic Vortex can be found online using the following links: