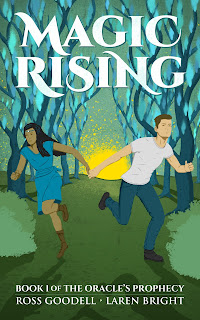 Good or Evil—Which Is More Powerful?

Ben Scott, a reasonably typical American teen, unwittingly steps across a dimensional boundary into a magical world. There he meets Mizli, a lovely and exotically dusky young sprite and finds himself thrust suddenly into the middle of a deadly contest for supremacy between light and dark magic. Telling him that he is in the world of Bespri, she explains that Bespri's Oracle has prophesized that magic is going to be turned toward the light magic of her country, Caldae, and away from the dark realm of Feyr.

Before he can absorb this mind-bending information, Ben is captured by agents of Feyr and taken to their powerful and charismatic Emperor who gives Ben an entirely different picture of the rivalry between the two realms. After a series of magical adventures in Feyr, Mizli's Camelot-like Caldae, and Earth, time runs out, and Ben must make a choice that will have a profound effect on the land of magic and his own family as well.