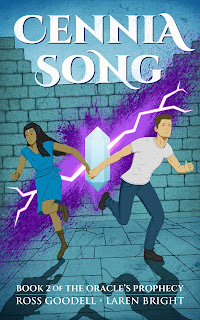 The Battle Between Good & Evil Continues

While Emperor Kantab mobilizes his vast army to attack Caldae, Mizli decides to attempt to rescue Ben. After some timely advice from the mysterious Vedleese, she secretly leaves Caldae on the seemingly hopeless mission.

And there’s more to Mizli’s plan. She will need Ben’s help in getting past squads of nearly invincible Imperial Dragoons to find a heavily-guarded prisoner and extract him from the Emperor’s Palace.

If they succeed, they must take an even more desperate risk to prevent the ruthless Emperor from conquering both Mizli’s peaceful Caldae and Ben’s unsuspecting Earth.


Also, for all five Kindle eBooks of The Oracle’s Prophecy Series at $4.95 for the set: Amazon